Calm Before the Storm

After a cold wet spring, it has been a warm, very dry summer in the Pacific Northwest.  Being a sun worshiper, I'm ordinarily good with that, but this summer has been a killer.  To the north of us, 163 wild fires burn in the interior of British Columbia, Canada.  Dense smoke has drifted south and blanketed our region with a persistent dirty haze.  Around midsummer the winds that normally blow cool marine air in off the Pacific die and we enjoy incredibly beautiful long, clear days as the sun drops slowly towards the horizon, twilight lasting until around 10:00 pm.

This has been a smoke-filled month.  Reports claim we have had the worst air pollution in the Country, on a par with Beiping, China, with extraordinarily high levels of particulates in the air, ozone and radioactivity.
http://cliffmass.blogspot.com/2017/08/wildfire-smoke-brought-enhanced.html

While missing the clear, clean air, I was feeling pretty good - until I wasn't.  Five or six days into the bad air, I started to cough and hack, first in the morning, then at night too.  My headaches began to amp up to near daily events although my SpringTMS continued to minimize my pain levels.  This last week our weather shifted as cool, moist air cleared out the smoke.  Still, each day is once again a struggle with daily pain, constant fatigue, cloudy thinking, low energy and all the rest. 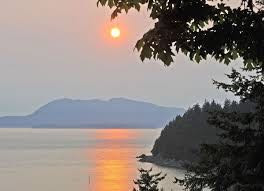 This is a pattern for me.  Give me a cold or the flu, an emotional upset, bad air, and I'm okay for a week or 10 days.  My body takes care of the infection or the assault.  Then, just when I think I've dodged the bullet, trouble sets in.  Migraines increase in frequency, duration and severity.  All those little associated symptoms like muscle spasms in my shoulders and upper back, terrific ear aches, tinnitus, depressed mood, anxiety and more begin to plague me anew.  Our weather pattern began to change for the better on August 11th, a welcome birthday present, but I'm still suffering the effects.  Probably in another week or two, if the smoke doesn't return, I'll begin to feel better.  In the meantime, I have to work hard to be happy and productive.

Yesterday was Monday, my usual day for taking care of business:  paying bills, battling with the insurance company, mapping out my week, making contact with people I want to see, making appointments.  I also try to get a couple of hours of writing in during the morning.  Yesterday, I just couldn't do it.  So I resorted to my tried and true inquiry, "What can I do to help myself feel better?"
Remembering to ask the question gave me a little breathing room.  The answers, my answers? 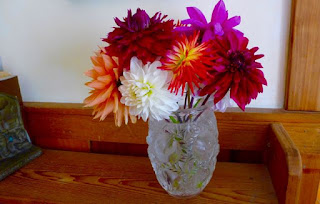 It worked.  I did feel better, not over my funk, but the day got a bit brighter and less fraught.

An added lift came from Ricky, the dahlia guy.  For a couple of months every summer and into the fall, he parks his van on a major thoroughfare and sits there most of the day selling his lovely flowers.  He has a boom box and listens to music, jazzy, bluesy stuff, and he has a camp chair or rather a camp rocking chair pulled up behind table that holds buckets of red, white, yellow, pink, purple, orange and variegated dahlias.  I've bought flowers from him every year but never really had a conversation.  Yesterday was different. 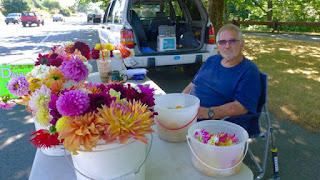 "Do you grow all your flowers?"  I asked.  "Oh yeah," he said.  "They're all mine - until they're yours!"  "You must have a pretty big garden."  "Wanna see a picture of it?"  "Sure," I answered.  He hauled out his cell phone and fiddled around for a moment and found photos of a large, maybe quarter-acre plot.  At the bottom of the photo, at the end of a row of flowers was a white stool, like a shower stool out of a medical equipment catalog.  "They're just coming on.  They'll get better in a week or two."  I was seriously impressed.  Ricky looks to be about my age, which is to say not young.  He's quite heavy, wears support stockings, and when he moves around his mobile flower stand, showing off his wares and bundling up my favorite picks, he hobbles as if his hips or knees hurt.  I drove away with my flowers, new respect for Ricky and a feeling of, perhaps, solidarity.

The next day, on the way home from my physical therapy appointment, I stopped by again.  I had a low grade headache, building as the day wore on, and a knot in my left shoulder.  "Ricky, I have a question for you."  "What's that?" he said.  "Could I take your picture?  I have a lot of headaches, and those flowers made me feel better yesterday."  "Sure, you can take my picture any time you want."  I shot three or four photos and thanked him.  He picked up a bucket from the table, "You want some yellow plums?  They're super ripe.  Picked them this morning 'cause they were gonna rot if I didn't.  Take as many as you want."  I took three.  He made sure I got the ones that didn't have a split.  "I like your camp rocker."  "Yeah, it's good.  I got it at Fred Meyers, pistons and all."  I bid him good by and headed home to cook dinner.  My headache had disappeared.