Over and over again, I find that extricating myself from a nearsighted focus on my own life, preoccupations with illness, politics or family problems, gives me space to let go and breathe in other possibilities.  With a little distance from daily pain, I can re-orient, think about the world around me and make room to appreciate people, ideas, nature and more.

This sort of opening up is a huge relief.  Ultimately I can then come back home, so to speak, allow myself to imagine other outcomes and better understand what my own next step might be.

Here are some of the things that give me breathing room. 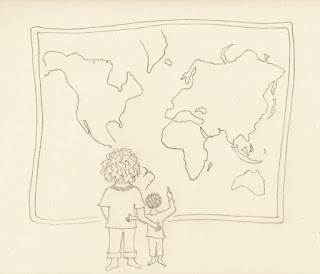 Two times a week I tutor English to an immigrant couple from another land.  No matter my emotional state when I arrive at Faith Lutheran Church where we meet, I leave feeling as if I'm on a new planet. Mary cooks for a living, putting in long hours behind a hot grill.  She has no vacation or sick leave and no health insurance.  Ray works long hours, six days a week, 10 hours a day, for a landscaping company.  Sometimes he puts in an 18 to 20 hour shift if his crew has to go east of the mountains to lay down gravel or beauty bark or drive 3 miles south to spread salt on the roads in winter.  They'd like to have kids, but that just hasn't happened.  They go dancing almost every Sat. night and fishing during season.  They like to go on walks, and they are enchanted by a new kitten in their lives.  Confirmation, first communion and baptism of friends' children are important events.  They have a rich life.  Since conversation practice is an important part of my teaching and their learning, we chat a lot.  Every week I learn new things about their triumphs and troubles.  I leave our sessions feeling lighter.  My head has somehow joined my heart to dwell in a place where gravity is not so heavy.

We have a Native American friend, a Navajo man, who was born and raised in Canyon de Chelly, Arizona, under the toughest conditions.  He is a good-hearted soul, who continues to make his gentle way in life in spite of perpetually difficult circumstances.  Phil spent eight years in Federal prison, which he says was time well spent.  He tells me he learned many skills there.  Released 15 years ago, living a productive life ever since, he still can't find a place to rent without someone else - with no felony conviction - to sign the lease.  Yet he is infallibly cheerful.  He does hard physical labor in spite of numerous old injuries.  He says it helps him keep the demons at bay.  He has taught me to let go of my judgments, expectations and opinions about who he is and how he should be doing things.  When he comes around for a cup of coffee, I enjoy his company and the opportunity to accept life just as it is.  One day, after a Phil visitation, my husband shook his head, smiled and said, "Another country."

When I hit the road (or airport) en route to a different place, something in me relaxes.  I am able to turn my attention away from myself and my pain and travel to a place of forgotten dreams.  The cosmos inexplicably shifts, and I open my hands and my heart and let go.  My shoulders relax and drop down from my ears.  My eyes open a little wider as my habitual routine falls away.  I drink in the sights and sounds with a new curiosity.

I love listening to the sounds of different languages, even when I don't understand the words.  I am transported by the songs and rhythms of Mercedes Sosa's music.  When I speak Spanish, I become a different person, more open to my own mistakes, more willing to try and sometimes fail without blaming myself.  I take on the heart and soul of a people who feel and see through a different lens.  Continuing to learn and to speak Spanish is an intellectual challenge I love but it also opens doors for me to trust and communicate from my heart.

There's nothing like a child to open your eyes to a parallel universe and give you the opportunity to make a small difference.  This afternoon my six-year-old grandson, Liam, and I went on a little excursion.  Here's a short action-adventure story packed into less than 2 hours.

The coins were in a piggy bank left behind a few years ago by my now 35-year-old son.  For years after he left home to sail off into the sunset on a long list of ships, he returned for a month or three from some far distant port and dumped all of his left-over pocket change into his piggy bank.  Before leaving home today, Liam and I emptied the contents into a bowl and sorted out all the foreign coins from Polynesia, Canada, France, Indonesia, Australia and elsewhere.  We arrived at the credit union only to realize it was Veterans' Day, and of course it was closed.

What do you do when plans go south?  Make another plan.  So we strolled down the street toward the donut shop with a detour to the ceramics store, where you can choose, paint and glaze your own cup, cow or critter.  Liam thought the ceramics store was a boring idea, but after a discerning look at all the options and a break-it-it's-yours discussion, we decided to return and try this out another day.  Shortly afterwards, with a donut under our belts, we headed for home.

Our route took us past an impromptu homeless encampment.  I explained to Liam that these people had no houses to go home to at night.  The rest of the way home we discussed what it meant to be poor and why not everyone could sleep in their own bed, get a job, save money for a place to live and more.  In the end Liam said, "At night, in bed, sometimes I think about stealing money from rich people to give to poor people."  "Sometimes I think that too," I replied, "but stealing from anyone, no matter who, is not a good thing to do."  I later learned they were reading Robin Hood in kindergarten.  Liam was pondering a local application.