Something we never talk about

Abuse is common and occurs worldwide.  It can be physical, emotional or sexual, and it also includes neglect.  There is a strong association between a history of childhood maltreatment on the one hand and migraine and other chronic pain disorders on the other.  This article by researcher Gretchen Tietjen is a good summary of the issue.  http://www.medicaldaily.com/emotional-abuse-childhood-migraines-391660

It is documented and accepted within the community of headache sufferers and specialists that migraine runs in the family.  There is a strong genetic association.  In addition there is now a theory that migraine may be epigenetic.  This means that environmental factors such as early stress and abuse may alter your DNA and that the effects are hereditary.

Presumably, If you have a genetic history of migraine in your family as well as possible epigenetic factors in your background, you are doubly threatened, but the research on how all these issues fit together is in its infancy.  The belief is that genetics may play a part, but the expression of that hereditary pattern gets turned on or intensified by the addition of environmental stressors.

Psychological therapies, including Cognitive Behavioral Therapy (CBT) and EMDR or Eye Movement Desensitization and Reprocessing are among the approaches that produce some success in defusing traumatic experiences.  Anti-seizure medications valproate and topiramate are FDA approved for treatment (prevention) of migraine.  These drugs are also known to reduce the effects of stress-induced, epigenetic influences and thus may be good choices for pharmacological treatment although they were not effective for me.

While there are researchers like Dr. Gretchen Tietjen documenting the relationship between migraine and abuse, I have found little research-based information on the efficacy of these different treatments, whether medication-based or psychological.

We tend not to address this issue in migraine blogs, and we don't discuss it much on other migraine-related, social media sites.  There is no mention of the link between childhood maltreatment and migraine on the websites of the National Headache Foundation, the National Migraine Association (MAGNUM) nor the American Headache and Migraine Association.  Your physician, even if he or she is a headache specialist, will probably not bring it up.  In my opinion, this is a big hole in our collective conversation about the disorder.

My family and me

In an attempt to get the conversation going, I'll share a little of my own story. I come from a nuclear family of four: mother, father and older sister.  There was no history of alcoholism, sexual or physical abuse nor of physical neglect.  On the other hand, there was a great deal of scary anger floating around our household.  There was serious stress related in part to my father's illness.  He was diagnosed with multiple sclerosis the year I was born.  While there are a lot of holes in my memory, I remember that my parents fought or argued incessantly.  My dad was the strong, silent type who was more inclined to shut down or leave when things got tense, while my mother's louder anger spilled over and sucked the air out of the house.  My father was in and out of hospitals throughout my childhood even as he continued to work as a civil engineer in the oil fields of California.  My mother had phlebitis and deep-vein thrombosis with a history of multiple surgeries and a near-death event when a clot broke loose and passed through her heart and lungs.

My relationship with my mother was forever difficult.  She was controlling and critical and angry.  I think that became worse over the years as my father's disease progressed and she felt trapped by the circumstances.  While I don't really trust my memory to sort all this out, there is no doubt I was afraid of her.  Perceiving no other way to fight back, I shut down and retaliated with silence, which fueled her anger but gave me some sense of control.  This habitual restraint no doubt cost me as I grew older and had difficulty expressing my own anger, vulnerability and even joy. 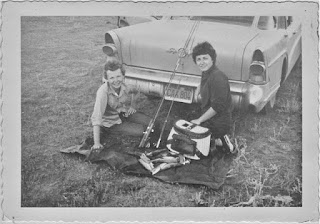 As my sister grew into adolescence, she began to express her anger verbally and with lots of door slamming.  As she grew older, she was charming, extroverted and very articulate.  As I began to grow up, I became more introverted and careful to avoid doing or saying anything that might upset the family apple cart.  Sometimes I was the object of my sister's anger and passion.  Six years her junior, I felt powerless and scared.

I have no idea whether or how much my family history has contributed to my headaches.  And among the many questions that remain for me is, "So what?"  Many of us come from an endless variety of difficult childhood circumstances.  Once you recognize that perhaps your early upbringing was less than salubrious, you can begin to learn and choose better ways of living with yourself and others.  Nonetheless, your early history remains and sometimes reinforces genetic predispositions.  While we are constantly learning new ways to help those who have experienced recent, trauma-induced pain and disability, there has been less success with the physical fallout of decades-old, poorly-remembered events and patterns of family disruption.

Over the years I have learned to be more expressive of my feelings and more open to myself and others.  I can identify and clarify thoughts and emotions as they arise.  While these are valuable skills, my headaches persist.  I have a mental health therapist I see regularly, and I continue to explore all avenues that my one day help reduce or eliminate my headaches.
Posted by Candy Meacham at 10:09 AM