When I get older losing my hair
Many years from now
Will you still be sending me a valentine, Birthday greetings, bottle of wine?
If I'd been out till quarter to three Would you lock the door?
Will you still need me, will you still feed me
When I'm sixty-four?
The Beetles

Now that I'm older plenty of hair
Zero years from NOW
Will you still be sending me a valentine, Birthday greetings, bottle of wine?
If my head is knockin' with terrible pain Will you bring me tea?
Will you still need me, will you still feed me
When I'm sixty-four?

When I was younger 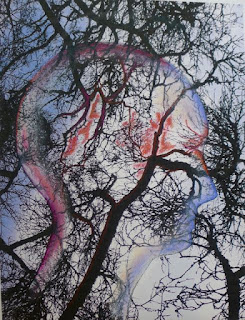 I have had migraines since childhood, but my headaches really began to ramp up during my child-bearing years.  In my early 30's they began to interfere occasionally with my work as an occupational therapist. The headaches happened infrequently with my first pregnancy, but by the time I was carrying my second baby, they were a persistent problem.  Things improved after my son was born, but the headaches slowly, almost imperceptibly became more frequent and more disruptive to my family and work. They had begun to be real interruptions in the flow of my days.

I can clock my slow, downhill slide over the next few years by the 5 leaves of absence I took to try and get a handle on the persistent pain.  Our basement clinic at the hospital had florescent lighting with no windows to the outside world.  At the end of a 5 or 6 hour day, I usually went home with a headache, which slowly resolved over the next hour or two.
After a few years, I moved on to work in the public schools.  Even though the job was part time, I rarely made it through the day without the onset of a migraine.

I also worked on my off days, evenings, and weekends doing production weaving and teaching weaving and craft classes to adults and children.  When I arrived home in the afternoon, I had two young children of my own to care for.  It was a productive, interesting time but difficult because I was juggling pain and fatigue as well as work and family.  Years later, Jeremiah, a teenage friend of my son, remembered often having to tone it down because I was in the throws of yet another migraine.

In 1991 Imitrex came out as the first designer drug aimed at aborting migraine headaches.  Having failed to respond to any of the preventative medications prescribed, I depended on Imitrex to keep me going for years.

In 2000, I went back to school and got a certificate to teach English as a Second Language. I got a job at the local community college teaching English to immigrants.  It was profoundly satisfying work but a continual struggle to perform well.  After 11 years, I retired early when I began to feel that my headaches were impacting my teaching.  Leaving a job I loved was a blow, but I'm proud that I made it to age 66 before having to 'hang it up.'

I tried and failed to find relief from several major first-line medications including Verapamil, Nortriptyline, Depacote and Topamax.  I also began to have adverse reactions.  Nortriptyline precipitated episodes of tachycardia. Naprosyn caused itching and burning in my hands and feet.  By 1998 or 1999, I was using Imitrex daily. My doctor advised against this and prescribed beta blocker, Atenolol, in hopes of preventing my escalating headaches.  Atenolol tipped me over the edge into a serious depression and required yet more medication.

Over time my specialists prescribed a total of at least 30 medications aimed at preventing migraines.   The results of this chemical barrage were short term or no benefits on the one hand and increasing side effects on the other.  These ranged from the usual including sedation, fatigue, dry mouth, hair loss, nausea, constipation, diarrhea, anxiety and insomnia to the unusual including loss of taste, breast enlargement, inability to do basic mathematics and visual anomalies.

The doctors all told me, 'Hey, good news.  When you get older (specifically, when you go through menopause), your headaches will go away.'  Sadly this did not happen.  As I began perimenopause, things really began to go south - and then they got worse.  Proving them wrong was not satisfying.  Actually it pissed me off for a long time.

Doctors want to help, and their answer is usually to prescribe drugs that have a track record with other patients.  While understandable, I have found little acknowledgment in the medical community that things change with age, and more drugs on board may make things worse instead of better.  Now almost 70, I've learned I can tolerate and benefit from some medications at a low dose.  Other drugs make my health and my headaches worse. I've also learned not to rely on doctors to sort this out.

With age, headaches have become more frequent but less painful.  Auras happen more often.  My pre- and post-headache fatigue has increased, and my stamina decreased.  Unreliable short-term memory and word-finding difficulties drive me crazy.  Many of these symptoms are common to migraineurs, but age, in combination with medication, accentuates the problems and makes them harder to tease apart.  And as always, my headaches continue to change.

Now I'm in the process of very slowly weaning myself off low doses of Baclofen, Klonopin, and Remeron.  I still use Naratriptan as an abortive and Fioricet for pain, both about once or twice a week.  Since January, I've been using the Spring TMS device, which is helping to decrease the pain and reduce my reliance on prescription drugs.


I find the more time I spend outside and around the water, the better I feel.  Yoga, meditation, art,  walking and bicycling, time with friends and family all feed my spirit.

The year I was born, my father was diagnosed with multiple sclerosis.  He suffered from fatigue, double vision, numbness in his hands, difficulty walking during exacerbations and, no doubt, other symptoms I was unaware of.  But he continued to work in a demanding career as a civil engineer until his late 50's, share in raising 2 daughters, play golf, do woodworking and, in short, carry on as best he could.

Not long after he retired, when I was a young adult, he asked me if I thought he was a failure.  I was shocked and found his question puzzling and incomprehensible.  I answered, "No, of course not."  But I didn't ask him why.  Now, I think I understand. In the face of debilitating illness, no matter how hard we try, we can't pull off a life not impacted by pain, weakness and fatigue even though we feel, against all odds, we should be able to do better or do more.

I struggle with a level of regret around the things I can't and now won't be able to do in my life.  I have a definite sense that time is short.  Achieving greater self acceptance and peace around my own personal triumphs and defeats throughout a life with migraine is, I think, the most important task for me now.