The Elwha River flows down from the Olympic Mountains in northwest Washington state.  The story of this river is one of tragedy and now, perhaps, triumph.  One hundred years ago the Elwha was dammed which provided power to communities downstream but eliminated the great runs of Salmon that were the lifeblood of the Lower Elwha Klallam tribe.  The National Park Service in cooperation with the tribe has just completed the largest dam removal project in history, and as of spring 2014, the Elwha is once again running free.  Adult salmon have already been seen above the previous location of the upper dam. 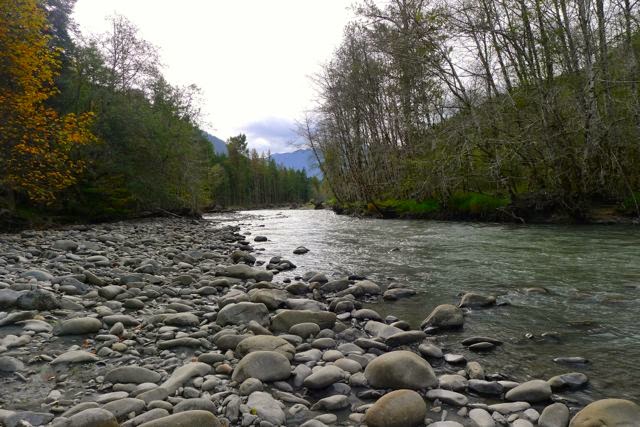 For me, the ongoing story of the Elwha feels like hope.  It's all about renewal.  We all seem to use metaphors to describe the harsh difficulties and the dark side of illness.  It's a great weight or a dark tunnel or a battle against great odds.  But we need metaphors too, to guide us toward health and hope.  Whether it's moving into the (sun) light or seeing light at the end of the tunnel, we need to find a vision, an image or a place that moves us toward health.  Gardens, benevolent spirit animals, milagros (from Mexico), saints or seismic events all have healing power.  The return of the Elwha to a free flowing river is just a newspaper story, on one hand, or, on the other, a profound event that has been years in the making, a story about succeeding against all odds.  I am working to develop a heightened sense of awareness, of beauty, of life itself.  On my good days, the days when I succeed........
the laugh of my grandson, a chickadee eating my sunflowers gone to seed, a late season humming bird sipping from the tiny flowers of the big old rosemary bush in my messy garden, they all move me.  I notice and feel a tiny bit better for it. 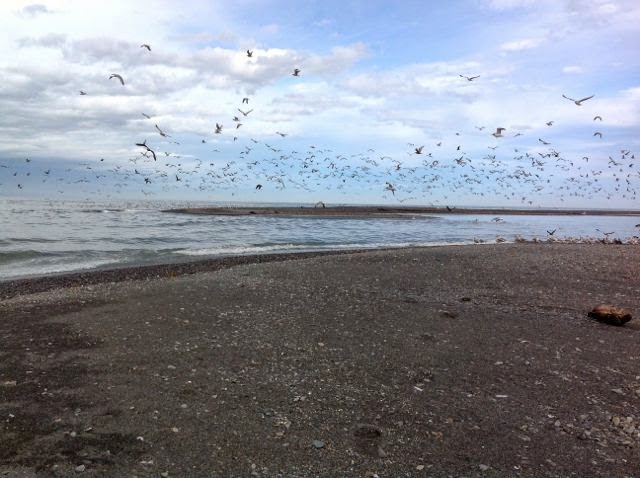 Last week we took a short trip to visit the Elwha.  We visited the River itself where I got to dip my feet, feel the flow of its cold water and squish the mud between my toes.  I listened to the hollow sound of water over rocks and sucked in its vitality.

We drove down to the mouth of the River where it dumps into the salt water of the Straits of Juan de Fuca.  There we saw all the newly deposited silt in the form of beaches and fresh water ponds with a huge abundance of birds.

We finished off our Elwha adventure eating dinner with friends Jenny and Melissa.  They work for USGS (US Geological Survey) and are involved with a survey of the outflow of the river and the sampling of water as it comes down the mouth and flows into salt water.  They are courageous, passionate women who run boats and dive to collect scientific specimens.  Hearing their stories, the science and the daily challenges and rewards of their work filled me with admiration as well as a strange kind of confidence that we are all metaphorically, somehow, in good hands.

There was a Woman with a very distressing problem.  She went to the healer in her village and said, "Please Sister, I have the most terrible pain in my head.  It never leaves me, and it has eclipsed all the good in my life.  The laughter of my children sounds like a murder of crows screeching in my ear.  My husband's caress feels loaded instead of loving.  The sun pierces my eyes rather than warming my soul.  The food on my table turns my stomach instead of nourishing my body.  My friends have drifted away, and I can no longer work and contribute to my family.  Each new day is a burden bringing yet a different dizzy disaster to my head and my heart.  Can you help me?

The Healer, who was a woman of vast skill and experience, had a deep well of sympathy vibrating in her soul.  Her appearance was illusive; her eyes changing color as she moved.  She seemed to be many people in one body.  She kept an herb garden and a dispensary filled with potions and remedies of all sorts as well as an infirmary for those patients so burdened by illness they needed her constant care.    She calmly questioned the Woman not just about the pain in her head but about her stomach, her neck, her limbs, her breath and what was in her heart.  They worked long into the night.  She probed her memories, and she laid her hands on the Woman feeling the heat and the vibrations in her head, the tension in her muscles and the tenderness in her heart. 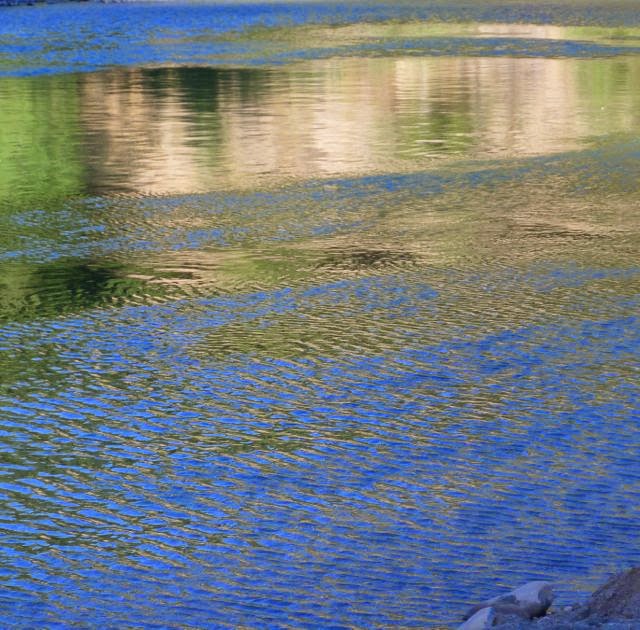 As the sun rose the next morning, the Healer sent the Woman on her way with a tincture to put in her tea in the morning and the evening, a plant from which to harvest and eat the leaves, and a deep black stone from the river.  When the stone felt the warmth of her hands, it began to emit a warm white glow that lasted just long enough to brighten her day a little.  Further, the Healer gave her a soft brown band for her head and a pair of turquoise-blue gloves patterned with intricate cabalistic symbols.  When the Woman placed the band over her brow, it tingled for several minutes, leaving her head cooler and her breath quieter than she remembered in a long time.  When she put the gloves on and ran her hands over her body, it came alive and sloughed off the pain and fatigue buried beneath the layers of her skin. 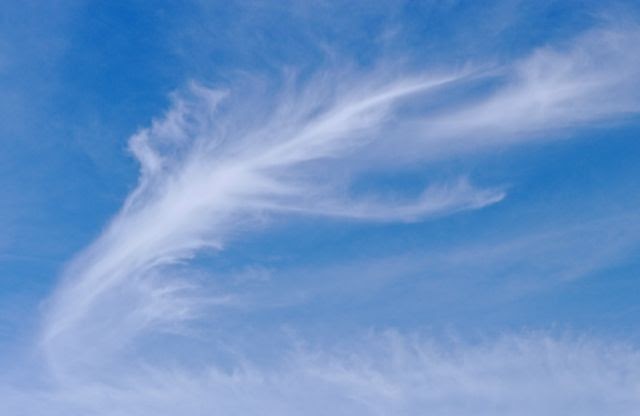 Slowly, over the next few weeks the Woman was drawn to sit by the river and soothed by the wet, froggy smell and the forever flow of the water.  She began to notice nuances in the clouds and marvel at the endless variation of shapes, textures and movement.  As fall and then winter came on, she began to truly see each leaf, each twig and branch on the trees around her home and further afield along the paths around the village.  The voices of her children modulated and they sounded like stories and emotions instead of the infernal racket of the crows.  When her husband touched her, any lingering pain dissolved.  The air felt fresh instead of raw or, at other times, warm on her skin instead of oppressively hot.  When the sun came out, it was a blessing.

The pain in her head still came and went, but not so frequently, and it no longer obliterated the valuable things in her life.  The lost child showed up at her door and she opened it and let her in.  Ordinary happenings in her life became possibilities instead of burdens.  Over the years, she had grown a carapace in an attempt to keep the pain at bay.  This hard outer shell slowly began to dissolve to be replaced by a soft cloak that protected her from the elements and softened life's blows. 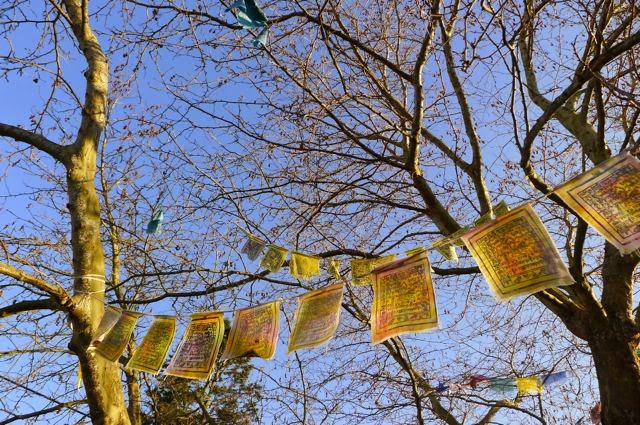 The hours and spaces in her days that had once been filled with pain were more open.  And while she had previously trimmed and whittled her life down and down and down to accommodate the pain, cutting off the good and productive to, perforce, make room for the pain, now she found herself wondering, but in a good way, what she would do with all that newly created space.