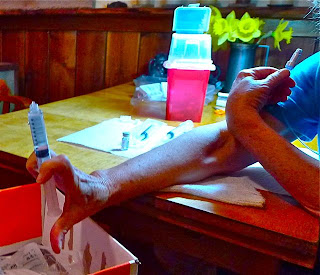 Here's whats going on.  My episodic migraines have once again morphed to essentially daily headaches.  I put up with this for a couple of months hoping for the best.  You know ......... against all odds, this nasty shit will just slither away under the same door it snuck in.  But of course that hasn't happened, so I heaved a big sigh and made an appointment with my ever-patient headache specialist.

We decided it was worth a trial of DHE (dihydroergotamine) IV therapy to try to turn it around.

Now I've done this before when I was in Michigan, in the hospital, under the care of MHNI, the Michigan HeadPain and Neurological Institute.  It wasn't exactly fun, but it was way tolerable and it definitely helped.  Of course there were many other interventions during that hospitalization, so it's kind of like comparing apples to oranges.

I live in a relatively small town, and my doctor's way of offering DHE IV therapy, if you really don't need hospitalization, is through a home infusion service.  The nurses come around to your house to administer the therapy, or that's what I thought I heard him say.  Maybe that is what he said.  ?????  My assumption was that they would come around twice a day and administer these IV drugs just like they did when I was in the hospital.  Never assume.  Why haven't I learned this lesson yet?  God knows, I'm old enough to know better.  "Good," I thought.  "I like nurses."  They tend to be really competent, good natured, intelligent, caring, etc.  And they're good chatters.  Besides, my son is in nursing school.  You can tell this wasn't one of my razor sharp thinking days.
I should have known better when I learned it was Walgreens that would provide my service.  Walgreens?  When I was a kid, they sold aspirin, Carter's Little Liver Pills, bubble gum, cheap toys and acrylic yarn and maybe a knitting needle or two.  Perhaps there's a connection there with syringes.  Oh yeah, and ice cream and maybe whiskey, under the counter, during prohibition.  Actually, that was a little bit before my time.

So, I decided to go for it, assuming that in a day or two or three or next week, things would get rolling. No siree!  No sooner had I arrived home from the doctor than Walgreens called and said their nurse would be out at about 8:30 pm. the same evening, and 'was that okay?'  I agreed, which was, of course, another ill-thought out decision on my part.

I hadn't washed my frizz bomb hair in about a week, and I was due.  It's a project requiring three hands and a lot of time, water, and patience.  Not possible with an IV in your hand or arm.  Four days into this nightmare, and "bad hair" took on new meaning.  Also I hadn't thoroughly researched what my insurance would pay for - or not.  And I had other things on my schedule for the  week, which mostly got canceled. 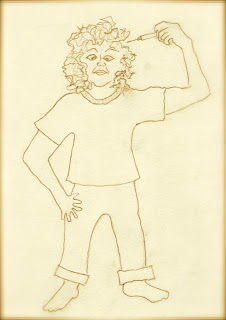 That same evening nurse Tori arrived.  She had all the good nurse qualities mentioned above, and I liked her.  However, she delivered some disturbing news.  She would teach me - in about 3 minutes - how to do the infusion, do the first one herself, and leave all the rest to me.  I was in low to medium-grade shock.  I had imagined myself leaning back in my Ikea chair by the fire with a cup of tea while this charming, highly-skilled person ministered to my needs.  No so.  This was to be yet another do-it-yourself project, and believe me, we have scores of those around our house already.


She put in the peripheral IV line after 2 stabs at it, which isn't too bad in my case.  She administered the (2) meds with a saline flush at the beginning, middle and end.  Then she whipped out a paper for me to sign, claiming I was comfortable doing these procedures on my own.  Noting my only too obvious level of overwhelm, she politely suggested coming back in the morning to help me lay it all out and to watch me do the infusion myself.  I agreed, thanking the great spirit that I had a reprieve.  Ultimately, I foolishly signed the paper, still not remotely comfortable with administering my own IV meds.

This home infusion process requires the following:  alcohol wipes, pre-loaded syringes of saline, different syringes for both meds, filter needles, two different (kinds of) medication vials, stupid little plastic things to snap the glass top off one vial, a little socky thing for over your arm or hand, and, with all the gear in it, another little baggy containing a set-up for changing your IV line.  This baggy contains  assorted syringes, needles, sterile paper "cloths," IV lines, clips, endings, etc.

All these things and more are in unlabeled plastic bags with no count on the bags so you don't know how many of which things are in each bag.  Also there may be a combination of of two or three things in one zip lock bag, or maybe not.  In some bags there are only, for example, saline syringes.  All these little and big zip locks are thrown together in, you guessed it, another big plastic bag.  I was asked to sign for receipt of these supplies so they can charge me and/ or my insurance company for what they delivered.  Of course even if you're lucky enough to have so called "health" insurance, we all know they don't shell out for anywhere near all the services or supplies you receive.  If this is a confusing paragraph to read, that's because it was a very confusing jumble of totally unfamiliar stuff.

By midweek, after 3.5 anxiety-fraught days of administering my own IV meds, I needed more supplies.  A young delivery guy came loaded with more bags of stuff.  I asked the delivery guy how much this jumble of supplies cost.  Dumb question.  Of course he didn't know.  I could tell, with great difficulty, after laying it all out on the table myself, there was more than I needed, but not the same amount more of each different item.  I called Walgreens.  In spite of the fact they were selling me - and my insurance company - these supplies, neither the pharmacist nor the supplies guy could tell me the cost of anything except the flat rate charged for the loose plastic stuff that didn't contain any medication or saline (empty syringes, needles, etc). 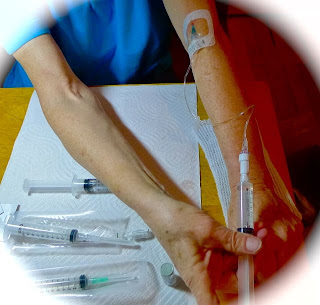 DHE, delivered intravenously, always causes nausea, so you have to first deliver an anti-nausea drug.  In my case, it was Reglan.  After a 2 or 3 days of this drug, I began to get more and more jittery and anxious.  In Michigan they used diphenhydramine (Benedryl), so my local doc agreed I could switch to that.  After that change I felt somewhat more confident with the process.

However, peripheral IV lines are not ideal.  After a couple of days they they tended to clog up, leak, blow out my vein, etc.  And it was alarming because not being a nurse, I really didn't know how far to push it or exactly what the consequences were of making a mistake.  It was also a little painful.  In a 9 day span, I had the IV line placed or replaced 4 times.  Of course it always happened at night about 10:00 pm., never in the morning.

There's more, but that's enough.  You get the idea.  The day after I finished my 9-day course of meds, I got a headache, and one the day after that.  Very frustrating and depressing.  Would I do this again?  I don't know.  Certainly not in exactly the same way.  I've learned some things, and I would insist on clearly labeled containers of supplies with an accurate count on each.  I would talk to my doc about different nausea meds or a combination of nausea meds.  And I might consider going to an infusion center twice a day where they know what they're doing.  Live and learn.

Since then things have been looking up.  I'll tell you about that next time.