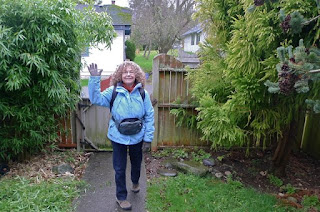 I have a plan.  Now.  For some time I've had a rich fantasy of walking off this nagging, chronic illness I have.  Last year, I began to plan how I might accomplish a long-distance walk.  Just open the door and head south, always south with no particular goal in mind, just the pure joy of walking, the feeling of being "on the way" and on my own two feet.  I have no desire to walk the Pacific Crest Trail nor to undertake any such rigorous, cross-country, mountainous trek.  Back roads, bike trails and streets of small towns and large if it comes to that, are my preference.

I had been thinking about this off and on for a long time, inspired by a story written by favorite author, Mary Austin, a story called, "Walking Woman," first published in Atlantic Monthly in 1907.
http://gaslight.mtroyal.ca/wlkgwomn.htm

"By her own account she had begun by walking off an illness. There had been an invalid to be taken care of for years, leaving her at last broken in body, and with no recourse but her own feet to carry her out of that predicament."


I began to take note of real women I knew about who did the unthinkable, who just began to walk - thousands of miles.  In 1999, at the age of 88 Granny D walked 3,200 miles from southern California to Washington DC, taking a little over one year.  She walked in support of campaign finance reform.

Peace Pilgrim walked across the United States for 28 years, clocking more than 25,000 miles in support of peace.  Then she quit counting (miles) but kept walking.  She started from Pasadena, California, during the Korean War and continued to walk throughout the time of the Vietnam War and beyond.

Closer to my own home in the Pacific Northwest, Bonnie Tucker, a retiree from Olympia, Washington, logged over 1,100 miles last year, wearing out 3 pairs of shoes.  And my friend Calvin Stutzman set out from home in Bellingham, WA and walked over the mountains to Chelan.

Last week I decided to take my methodic inspiration from a guy, Harvey Manning who walked the beaches from Seattle to Bellingham in a series of day treks - and then wrote about it.  I decided to just set out from my front door and walk as far as I felt like it the first day, then call my husband for a pick up.  I'm recovering from a foot injury, and I have headaches nearly every day, so, for me, I figured this was a doable plan.  The next walking day, I would drive the car to the point I left off the day before, park and start walking south once more.  My husband and I agreed this sounded great, but we're not sure how it will work out once I get about 100 mi. from home.  I'll let you know.

I head south on the Interurban Trail with a nut bar, an apple, a water bottle, my camera and cell phone.  And, of course, my raincoat.

If anyone wants to walk with me on any day, let me know.

Below:  scenes along the way.