I've had migraines for as long as I can member.

They started in childhood and have gotten worse over the years especially since pregnancy with my second child.  They say that migraines tend to fade away as you get older, after menopause.  Not mine.  They just got worse.  Now I'm on a variety of preventative medications with a variety of desirable and undesirable side effects which partially control my headaches.  I just returned a month ago from an inpatient hospitalization through the Michigan Headache and Neurological Institute.  More later about that.  I now recognize what I have resisted for many years:  I have migraine (I knew that) disease, which is a difficult, lonely chronic disorder.

What I also have grown to recognize over the years is that having chronic migraines has contributed to the development of art as a central to my life.  As Terry Tempest Williams (and probably others) said, "It is not optional."  It is a strategy for survival. 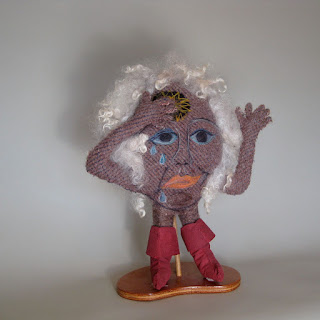 The title of this piece is La Migraña.  She is, of course, me.  The boots are "Seven League Boots."  They come from a dream I had in which I was wearing seven league boots.  They also come from English fairy tales where a tiny guy steals magic boots from an ogre.  They allow him to leap mountains in giant strides.  Here they give me a real sense of power in spite of or maybe because of migraine.